Self-Realization Futur ancien fugitifAfter Beatrix Potter Retrospective 1:15 I Love My Taste Wedding Bouquets They Call Us The Screamers No to Crucifixions Le Bien Turing (...)& I

Some People Believe That... God Is A Virus Have Faith Abandon All Hope The Avant Garde is Dying Listening to Bobby Few Nobody Loves Me Extremely Happy Je t'admire mon chéri

Giraffes with Faces of Ecstatic Saints 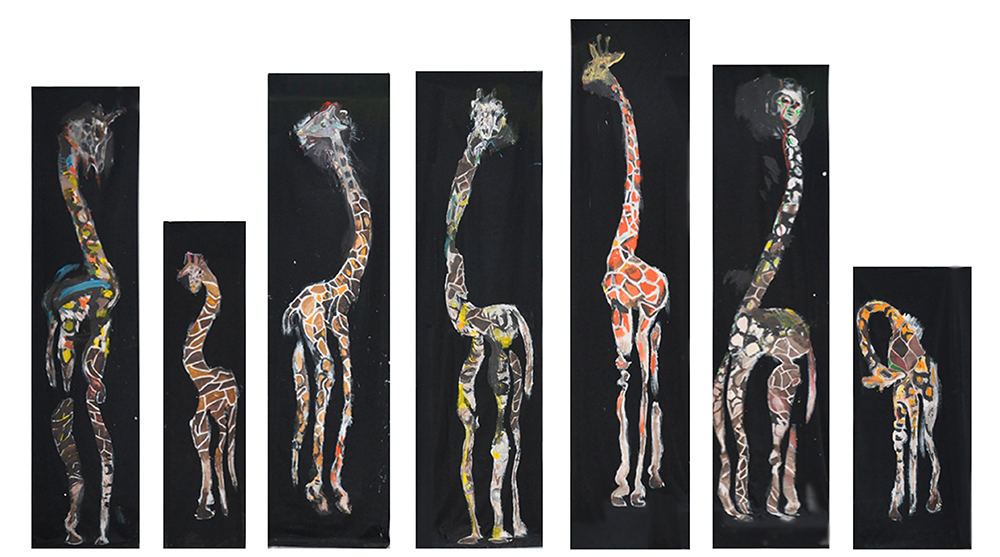 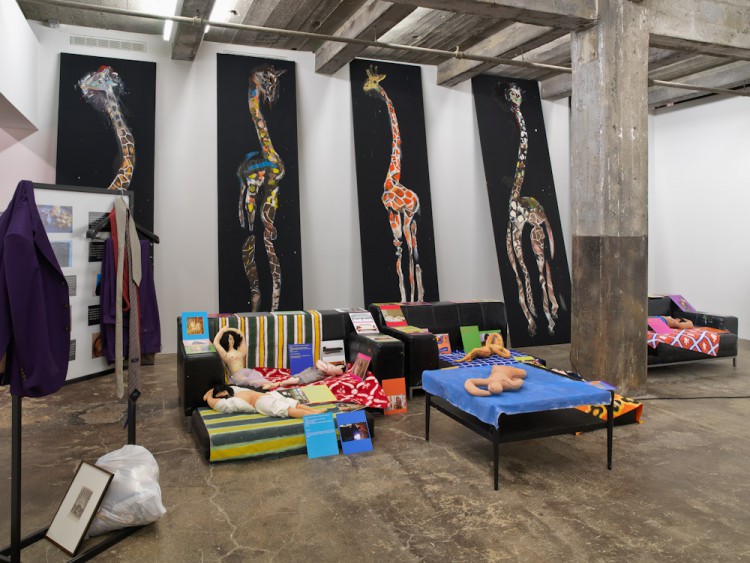 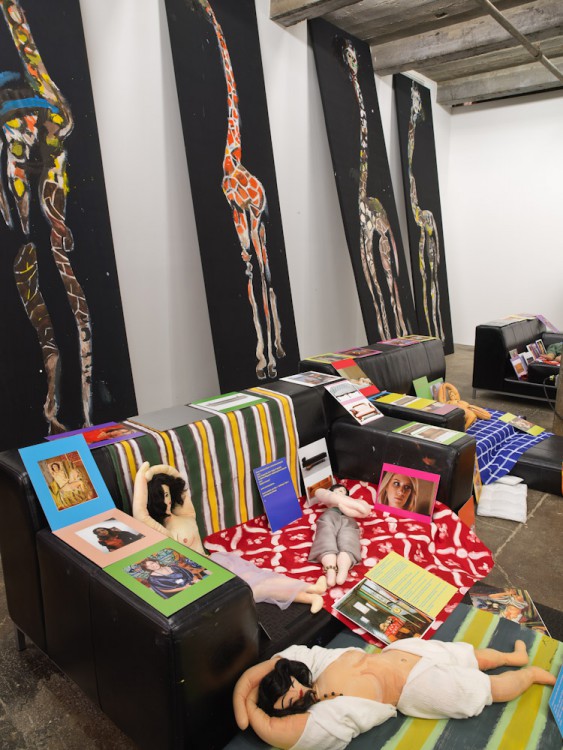 Titles, from left to right:

1/ Euphemia Gee: named after Saint Euphemia, who was tortured on the wheel but still refused to renounce her faith, even when she was stabbed in the lungs. She was sentenced to death in the arena where she died of wounds inflicted by the wild animals attacking her. Also named after S. Germanotta Lady G. / “Put in on amen fashion, celebrate a new compassion, style your passion, Jesus is the new black, work it black Jesus” (by P.Blair & S. Germanotta) / Feelings and surfaces / Maybe it is you who are the enemy.
Oil and acrylic on black fabric. 101 (w) x 381 (h) cm,

2/ Rose of Lima Baby Gee: named after Saint Rose of Lima, the first New World canonized saint who, at a rather young age, began her life of ritualistic self flagellation, starvation and endless piety. She was wearing a crown of flowers woven around a coronet of metal spikes that would be embedded into her scalp. In times of distress, Rose was known to seclude herself and hit her head to make the spikes dig deeper into her head, reminding her that no matter what she did to herself, Jesus suffered worse / A nun sucking a donkey, why not? / Cleaning bones for Uganda, why not?
Oil and acrylic on black fabric. 87 (w) x 247 (h) cm.

3/ Jacquelinette also called Elmo: named after Saint Elmo, who was tortured by having his intestines wound onto a winch or capstan before he got beheaded / Der Verfremdungseffekt (Brecht) / Do I really want to see someone cross the gallery – very seriously - slowly - like they’re walking on eggs or like they are a giraffe? / In hell nobody listens to your career problems.
Oil and acrylic on black fabric. 105 (w) x 361 (h) cm.

4/ Marat Gee: named after the painting by David where Marat is dying with his eyelids droop, his head weighs heavily on his shoulder, his right arm sliding to the ground. His body, as painted by
the artist, is that of a healthy man, still young. The scene inevitably calls to mind a rendering of the «Descent from the Cross.» The face is marked by suffering, but is also gentle and suffused by a growing peacefulness as the pangs of death loosen their grip / The linguistic survival of the one addressed (J. Butler) / Blood foaming around him in water.
Oil and acrylic on black fabric. 107 (w) x 396 (h) cm.

5/ Gee Rosy Bindi Gee: named in reference to Italian former health minister Rosy Bindi who, in August 2010 said about Kadhafi’s lectures in front of a group of 500 young women hired and paid by an agency: “They are a new, humiliating violation of Italian women’s dignity”. One of the women present claimed that Kadhafi had said at the gathering: “Women are more respected in Libya than in the West” and offered assistance in finding Libyan husbands / The malediction of the will / A powerful and poetic de-constructed urban and intimate drama.
Oil and acrylic on black fabric. 102 (w) x 382 (h) cm.

6/ Lucia Bernadette Gee: named after saint Lucia, a wealthy young Christian martyr who consecrated her virginity to God, refused to marry a pagan, and had her dowry distributed to the poor. Her would-be husband denounced her as a Christian to the governor of Syracuse, Sicily. Miraculously unable to move her or burn her, the guards took out her eyes with a fork. In another version, Lucy’s would-be husband admired her eyes, so she tore them out and gave them to him, saying, «Now let me live to God»/ Suffering as ornaments/ Heidegger, Identity & Difference / Looking at the toiletries in her bathroom, it was not nice to think about her rubbing them on her body.
Oil and acrylic on black fabric. 119 (w) x 402 (h) cm.

7/ Saint Baby Vitus Gee: named after Saint Vitus, condemned to death in the arena. As wild beasts and lions refused to attack him, he was killed by being boiled in oil / The DSK-Diallo case /The object of the masquerade is to say nothing / No one knows what she sees in her dreams.
Oil and acrylic on black fabric (2011). 99 (w) x 209 (h) cm